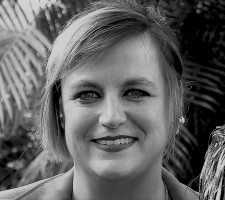 Brandy Stark moved to St. Petersburg, Florida, in 1992.  As an undergraduate, she took a course in sculpture at the University of Tampa where she discovered her wire wrapping abilities. Utilizing welding rods, she made three wrapped wire figures:  a triton, a dragon, and a centaur. These constituted the first generation of her “Metal Myths” series, established in 1995.  A lifelong lover of world mythology, her works often manifest as ancient characters, legends, and deities.  Tying past to present, Stark sees herself as a Neo-expressionist with the weaving and wrapping process she uses transferring her own energy into the piece.  Inspired by the sculptures of Joan Miro, she also utilizes found objects in her pieces.  These promote an awareness not only of upcycling, but symbolize that everything and everyone has a place in this world.

As she expanded her visual arts career, she also became an arts correspondent for the St. Petersburg Times (1998 to 2002). She also wrote for other local publications, including Bayside News, Sterling Powell's City Life, and several art based websites. This gave her invaluable insights to the local artist community and inspired her to work even harder on her own artistic vision.

She is a full time faculty member at St. Petersburg College in the Fine Arts and Humanities Department.  She teaches Religious Studies and Humanities courses at the Downtown and Allstate campuses, and for the Honors College, Study Abroad, and Interdisciplinary Studies programs at the Gibbs/St. Petersburg campus.  In her effort to increase student-artist interaction, and to provide a free location for artists to share their works, she secured supplies and funding for art display areas at the Downtown and Allstate Center campuses.

Stark served as an artist-in-residence for Bay Pines VA Hospital in 2004, and on the boards of The Exhibiting Society of Artists and the Suntan Art Center.  She has won “People’s Choice”, “Best 3-D” and “Best Concept” awards for her wire works.  Starting in 2016, she reignited her interest in photography and has won Best in Show for Reflections of a Flamingo at Stirling Galleries in Dunedin, Honorable Mention at the Suntan Art Center for Are You Being Koi With Me? She also received a Merit award in the Pinellas Park Art Society’s show, “Fur, Fins and Feathers” for her piece, Flamingo!, which was also accepted as one of 40 works to show at Amalie Arena in 2016. Shiva Nataraja won honorable mention at the Suntan Art Center and Peering Through A Portal placed third in the Pinellas Park Art Society show, “Scapes”.  Her wire work, Octopus, won 2nd place in the Necronomicon Art Show.  She was also chosen to display her art at the Dali Museum’s “Twelve Nights of Dali” event (2016).

Misc. studies:  I am also known for my research into liminal beings, death rituals, and life-after-death topics.  I have spoken about such to various universities, organizations, and groups.  I have also been featured on national and local radio, print media, and television.

Pets:  I love animals, but my two favorite critters are pugs and rats.  I do a bit of work for the local rescue organizations, which I advocate heavily.  I currently have Achilles, Odysseus, Pandora, Patroclus, and Chin as my pugs.

My ratties are my other loves.  I do not believe in breeding rats, but I do my own work in rodent rescue.  Hence, I currently have hairless, dumbo, hooded, rex, fancy, and pink-eyed whites.  Most of my rats are named for agents of "The Shadow", as I have a great love of pulp fiction and comic books.