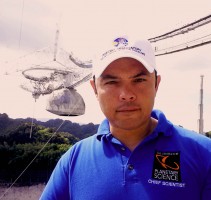 Office Schedule
Biography
Antonio Paris is the Chief Scientist at the Center for Planetary Science, an Assistant Professor of Astronomy and Astrophysics at St. Petersburg College, FL and a graduate of the NASA Mars Education Program at the Mars Space Flight Center, Arizona State University. He is the author of three books: Mars: Your Personal 3D Journey to the Red Planet; Space Science; and Aerial Phenomena. His latest peer-reviewed publications include:


Prof. Paris is a professional member of the Washington Academy of Sciences, the American Astronomical Society, and has appeared on the Science Channel, the Discovery Channel and the National Geographic Channel.