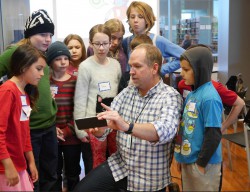 Chad Mairn is a librarian, teacher, author, and self-described geek who frequently shares his enthusiasm for 'all-things technology' as a speaker at library and technology conferences. He is an Information Services Librarian, Assistant Professor, and manages the Innovation Lab at St. Petersburg College. In October 2015, the Innovation Lab received a $7,500 Curiosity Creates grant from the Walt Disney Company in collaboration with ALA’s Association for Library Service to Children to expand their successful Maker Boot Camp series that helps “promote exploration and discovery for children ages 6 to 14.” Imagination and originality, flexibility, decision-making, communication and self-expression, collaboration, and motivation are the critical components of creativity that the Maker Boot Camp has integrated into their curriculum.  Here is the Maker Boot Camp documentary film.

While an undergraduate studying Humanities at the University of South Florida (USF), Chad was awarded a Library of Congress Fellowship archiving Leonard Bernstein's personal papers. During his Library and Information Science (LIS) graduate work, also at USF, Chad became a technology liaison between the Bill Gates Learning Foundation and Florida public libraries.

Much of Chad's recent interests have focused around mobile and emerging technologies. Chad has written a couple of book chapters and numerous articles on library technologies. In 2016, Chad was awarded the League of Innovation Excellence Award in Teaching and Learning for Innovation in the Use of Technology!

Chad also plays drums in Low Season and he also co-organizes Gulf Coast Maker and Comic Con, which has been held at the St. Petersburg College Seminole Campus since 2014.