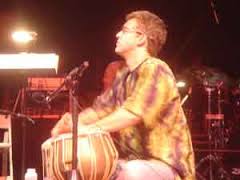 Patrick Hernly is a drummer/percussionist whose unique personal style has been shaped by his work with artists from around the globe. His performances include many prestigious venues in the U.S. and abroad, including Lincoln Center, Teatro Colon (Buenos Aires), and the Hollywood Bowl. Patrick was featured at the Nokia New Years 2006 celebration in Mumbai, India, with Oscar-winning composer A.R. Rahman, as well as a soloist on Rahman's 2007 "3rd Dimension" tour. He has toured Latin America with La Orquesta Sinfonica de Guayaquil and the Lima Ballet, and has performed with Latin pop sensation Anais and Grammy Award winners Fonseca and Tanvi Shah. He has also performed in the Tampa Bay area with The Spanish Lyric Theater, world music/Latin jazz ensemble Manigua, Afro Cuban artist Freddy Montes, flamenco troupe Somos, and soul-funk-reggae band The Hip Abduction. Patrick has also shared the stage with such stars as mridangam maestro Umayalpuram K. Sivaraman, Latin greats Jon Santos and Horacio Hernandez, and percussion gurus Glen Velez and Bob Becker. Patrick earned his Master’s degree in percussion performance from Indiana University, where he was awarded the performer’s certificate. He earned his Ph.D. in Music Education from the University of South Florida under the advisement of multicultural music education expert C. Victor Fung. His research has been published in national and international journals, and he has presented at national and international conferences.